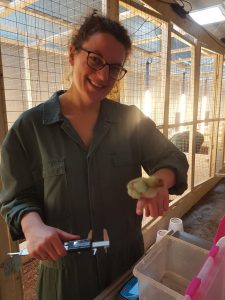 The year 2020 had a very exciting start for the PPILOW project. On the 8th of January, we started the incubation of the laying hens for WP4. Using these chickens, we will investigate whether early-life improvements can reduce fearfulness and feather pecking and stimulate outdoor range use in later life. Half of the eggs were incubated in complete darkness, which is standard in commercial hatcheries, while the other half received a light-dark cycle of 12:12 hours with green light, which has been shown to have a positive impact on avian brain development and reduce feather pecking in previous studies. The last three days of incubation, we monitored hatching in shifts every six hours, in order to see if the light treatment has an effect on the hatching window. Quite exhausting, but very rewarding to see the first chicks of the PPILOW project! Since hatch, the chicks have been housed at Utrecht University, in 20 groups of 10. From one week of age onwards, half of the birds have been receiving daily enrichment in the form of a food puzzle with black soldier fly larvae. It didn’t take the chicks long to figure out the puzzle, and they spend quite some time manipulating these dispensers! We have gathered a team of enthusiastic students around us, who will help us the following months with collecting data from behaviour tests and home pen observations. Special thanks go to my colleague Maëva Manet, who started her PhD in the Horizon2020 ChickenStress project at the same time as I started mine. We collaborate since we both aim to improve laying hen welfare. In the light of the three R’s (Replace, Reduce, Refine), this means more data with fewer animals! When I’m not busy with my 200 feathered kids, I’m working on establishing a National Practitioner Group of Dutch poultry farmers, with whom we can exchange ideas on how to further improve laying hen welfare. Together with these Dutch farmers, we aim to build the bridge between science and practice and really make a difference for laying hens on low-input and organic farms! 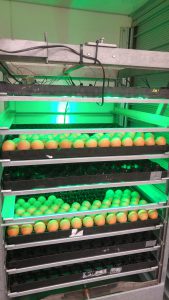 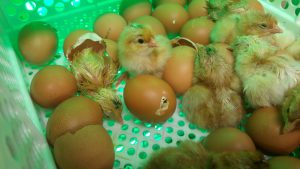